With the Winter fast approaching and my drilling campaign now closed I made the most of the quieter period and visited a fellow Worcestershire Mzuri user, Edward Righton of Hill Court Farm.

As a mixed farm, Mr Righton runs a herd of ½ Angus, ¼ Simmental and ¼ Friesian beef cows, a cross that he devised for their ability to thrive outdoors and suitability to his system. The cattle are outwintered until the end of January, when they are brought in a month ahead of calving to allow for monitoring and a tailored ration.

Keen to reduce his cost of production, Mr Righton looks to keep his cattle outside for as long as possible to minimise the daily running costs of a TMR feeder and a straw blower alongside the associated costs of loading, carting and spreading the muck of housed cattle.

This year, however, with unusual weather patterns including a particularly dry Spring, forage stocks were down by 40% going into Winter. The saving grace has been a bumper crop of Stubble Turnips, established with Mr Righton’s Mzuri Pro-Til 3T.

Previously Turnips were established using a carrier to break up the surface of the soil to avoid the effects of chemical residue before being drilled, followed by another pass for the application of fertiliser. Mr Righton now achieves all of this in one pass with the Mzuri system. He believes that the loosening of the soil created by the Pro-Til’s front legs allows for better rooting and has been the turning point for his Stubble Turnips.

In a rotation of Wheat followed by Stubble Turnips, Spring Cereal, Wheat and then Beans, Mr Righton has also been impressed with the ability to band place fertiliser below the seed, now possible with his dual tank Pro-Til. “The fertiliser at seeding has been very important, making nutrients available in a targeted manner under the seed to maximise the efficacy”.

The turnips were drilled into baled Wheat stubble at 2.5kg/ha with 120kg/ha of DAP at seeding, followed by a secondary application of 120kg Ammonium Nitrate. Falcon was applied to knock out grass weeds and volunteer Wheat at an early stage.

Mr Righton operates a strip grazing system across the turnips and features a line of round bale straw positioned across the field for each break fence move. Using the bales to give a good indication to how hungry the cows are, Mr Righton moves the fence between every 1-2 days depending on the size of the section. Taking only 25 minutes to set up the next break, Mr Righton uses this opportunity to assess his cows whilst moving which contributed to significant time and fuel savings.

Not only has Mr Righton had a bumper crop of Stubble Turnips this year, he has seen other benefits to his farm since switching to the Mzuri Strip Tillage system in Autumn 2017. The most noticeable is the increase in farmland birds. Specifically, Pied Wagtail and Lapwing numbers are flourishing as a result of the sustainable eco-system supported through reduced cultivations.

It was a pleasure to visit Mr Righton and his cows and a big thank you to him for sparing his time. It is great to see how the Mzuri system is utilised in other farming enterprises and to hear farmers thoughts and experiences since switching their establishment method. 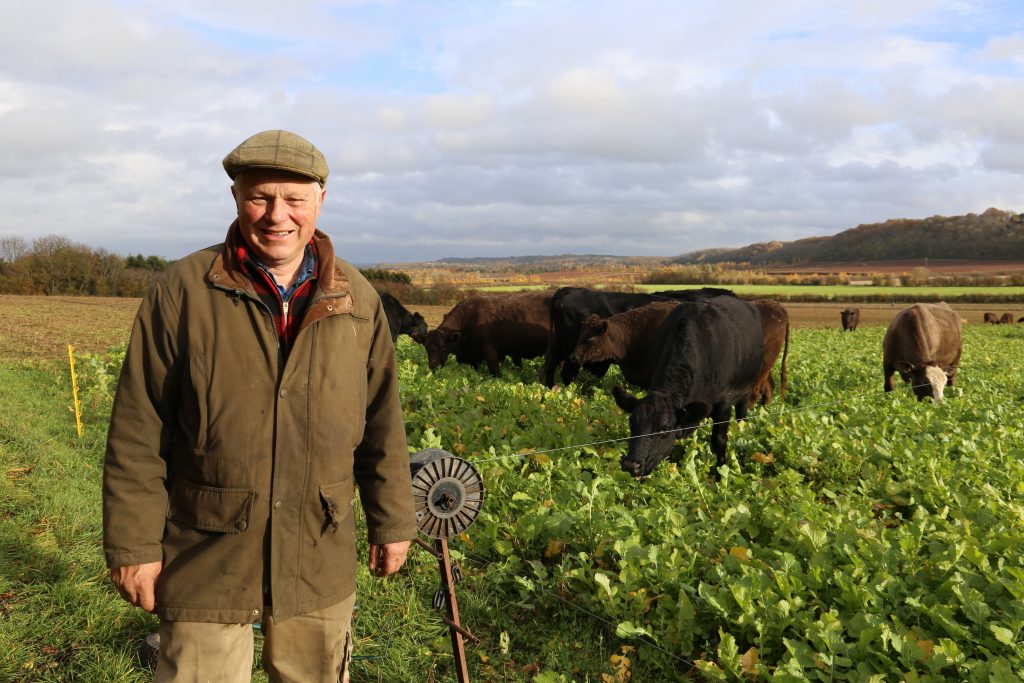 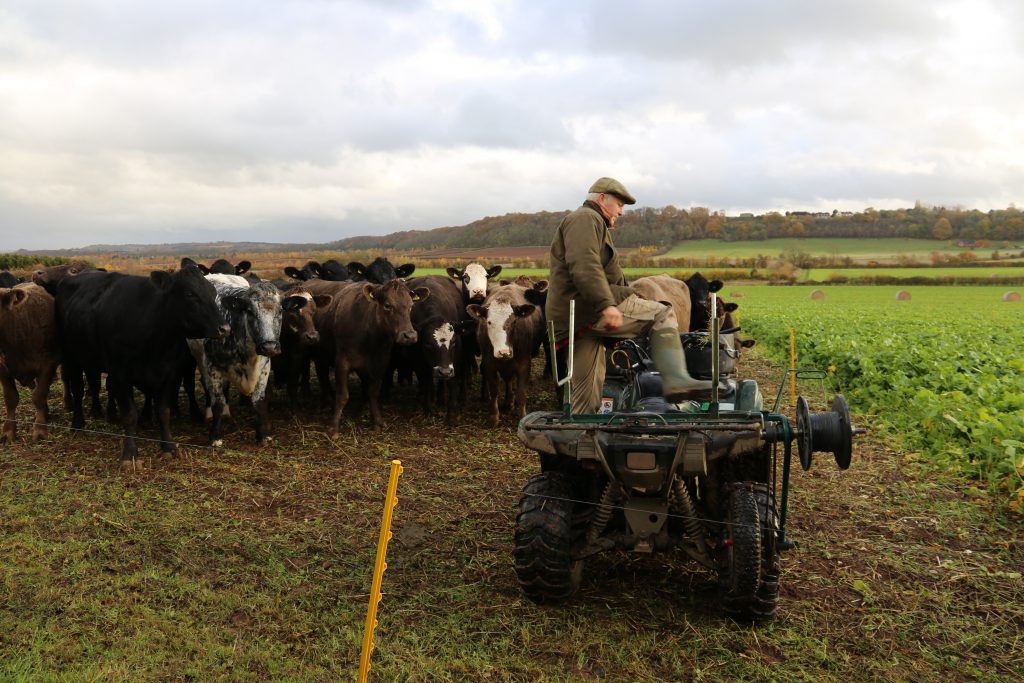 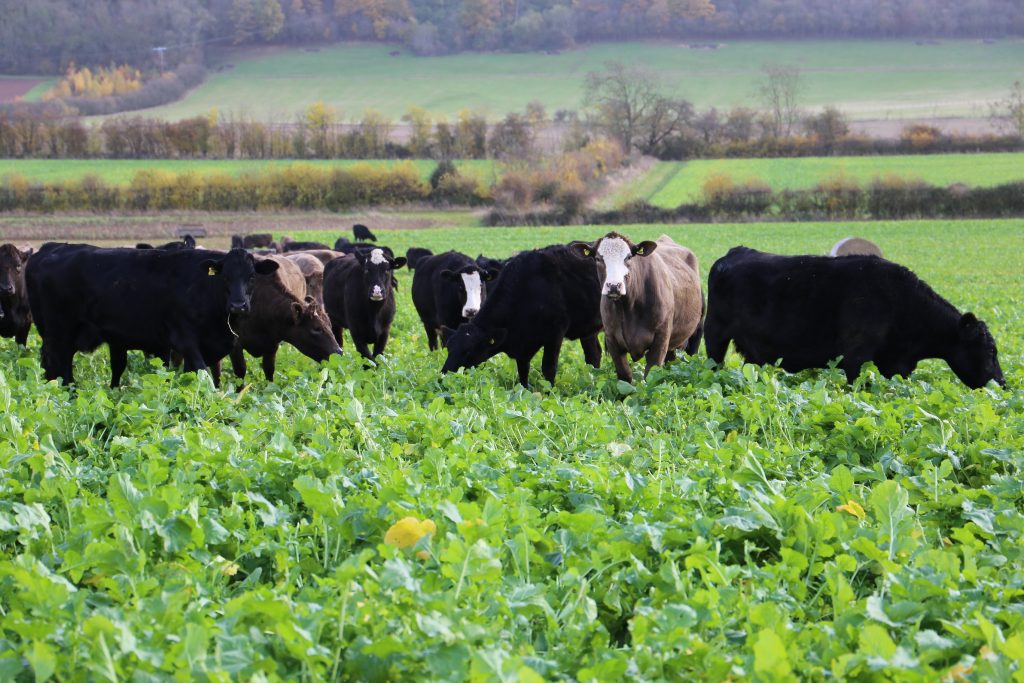 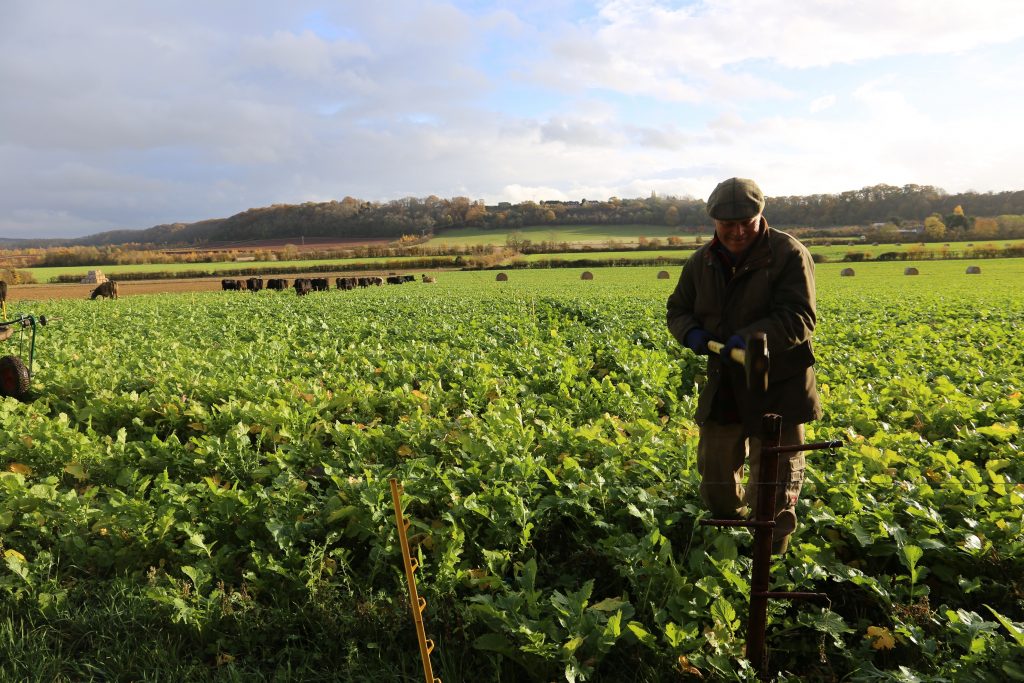