With harvest now imminent the final preparations were made and with volunteers suddenly thin on the ground I donned my dust mask to give the grain stores a final clean down. I guess the thought is always worse than the action, but with a satisfyingly smart end result I can’t help but look forward to filling them with this year’s crop!

Continuing with the theme of harvest prep, the trailers were cleaned, and the combine’s side knife was fitted alongside its general servicing. It doesn’t take long to get to the point where it seems like there is nothing left on the farm to either grease, oil or fuel up.

My eagerness to see whether the crops promise would deliver over the weighbridge was sated on 24th July when we began harvesting our hybrid variety DK Expedient. A thunderstorm coupled with 9mm of rain the evening before made combining a dusty affair, a pattern that continued with odd showers right through to the end of the month. The following day saw the hottest day of the year so far with temperatures hitting 33˚c, days that certainly make you thankful to be farming at a time of cabs and air conditioning! With temperatures at 22˚c by 8am harvest was stopped by lunch as the moisture dropped below 6%. With limited space on farm this year we didn’t want to be hanging on to the crop for too long so air was swiftly blown through the heap to take the temperature out ready to be sold.

We wrapped up the OSR harvest by the end of the month, having been particularly stop start at times. Our average yield of 4.2t/ha fell short of expectation based on our 5 year average, nonetheless given the CSFB pressure OSR remains a profitable break crop on the farm due to the almost guaranteed establishment of the Mzuri system, something that we never take a risk on.

In preparation for harvest the headland margins were topped providing a 1.2 metre clean swath for the combine to cut to. Allowing me a final look at the crops before the combine is the next machine in the field it’ll be all systems go soon! 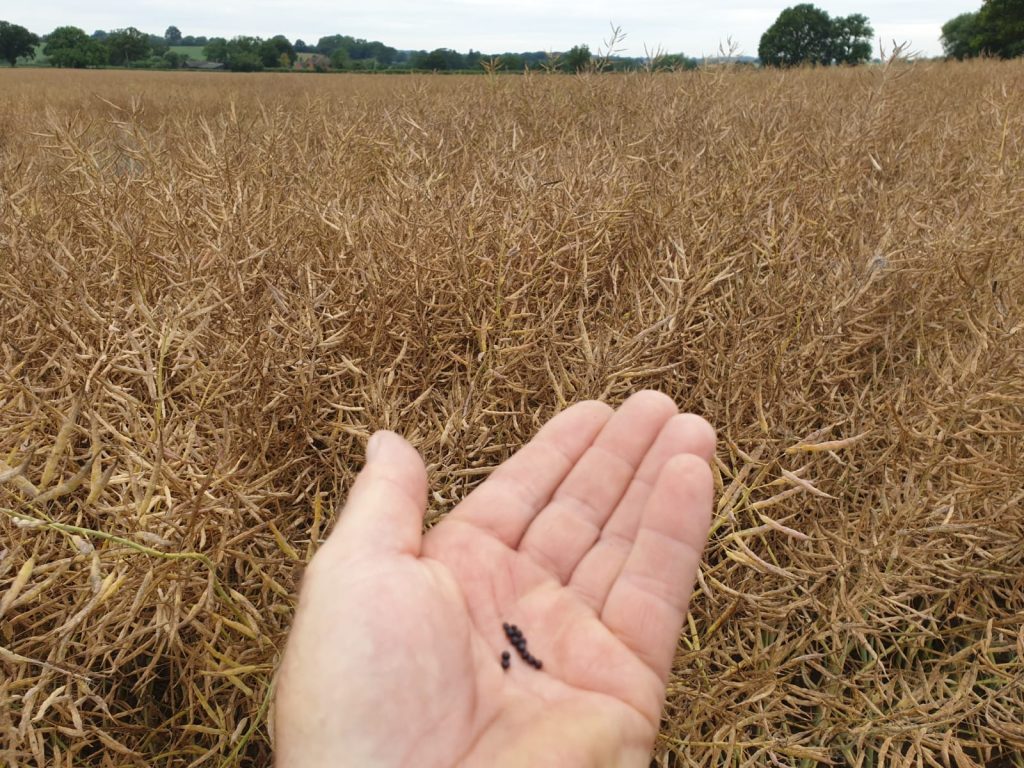 Pods were well set and harvest was one of the hottest we've had!

The combine got her fair share of tlc this year too!

July tends to be a waiting game with winter wheat as we edge closer to harvest. But keen to capture all the information that we can, to then tally with yields I set about collecting ears, along with noting counts and measurements. A total of 7 different winter wheat varieties are being grown on the farm this year, along with trials looking at seed rates. Hopefully, this will prove to give interesting insights into each plots yield components and how we might then build on these trials going forward.

By the middle of the month the crop seemed at a flick of a switch to noticeably ripen, as another cropping season draws to close. In preparation for harvest headland margins were topped providing a 1.2 metre clean swath for the combine to cut to. Allowing me a final look at the crops before the combine is the next machine in the field it’ll be all systems go soon!

It won't be long before the winter wheat will be coming into the shed.

The rain received in June is paying dividends with the spring wheat, and grains continue to swell hinting at what I hope will be a good bushel weight. With Cochise being one of the tallest varieties on the list it’s proving to be a good test of straw strength as the ears grow heavier. The crop was sown using the Mzuri Pro-Til dual shoot coulter on 330mm centres, this spacing ensures excellent light interception which in part results in a stronger, healthier straw, helping to maintain a standing crop particularly important in a variety that offers milling quality.

Cochise spring wheat is standing tall with its strong straw, and clear headlands ready for the combine to boot!

Our crop of spring beans continues to progress well, despite a testing time in terms of wind and rain. The variety Lynx chosen for its robust disease and standing scores (as well as yield!), is certainly showing its agronomic worth. Remaining clean the crop is standing well even with a heavy pod set.

Lynx Spring Beans taken on the 16th July, looking even across the field

Our late May sown maize emerged evenly after benefiting from the band placement fertiliser from the Pro-Til’s leading leg, however the rain and cool overnight temperatures weren’t exactly the June conditions to enable this warm season crop to romp away as we’d normally expect. A foliar nutrient application certainly made me feel better in terms of helping the crop along and would seem to have a similar response from the crop as growth had noticeably kicked in by the end of the month. I also applied for the first time Maister to clean up some thistles and the occasional grass weed, whilst arguably a little extravagant on crop destined for wildlife, its achieved fantastic control, a useful tool still.

July saw the maize motor, underlining the crops ability to convert heat into growth. The crop had plenty of moisture during its rapid growth development thanks to the strong rooting promoted from the Mzuri system and by the end of the month the crop stood tall with excellent cobs.