Typically a quiet month on the farm, this year February has kept us busy with multiple farm visits and finishing up the last of the hedgecutting.

Putting the Razorback through its paces

This season, I’ve had the fortunate pleasure of using the new Mzuri Razorback rotary hedgecutter, with the aim of putting it through its paces. And I’ve certainly done that! The innovative machine never missed a beat and tackled the most challenging hedges with ease. I’ve really enjoyed using the Razorback and the hedges have thanked me for it too! The 5ft head has been a godsend for the farm’s larger hedges, reducing the number of passes needed, and saving me time and fuel. The rotary action of the cutting blades also meant that the debris was mulched into a fine dust leaving a crisp and clean finish. A most definite thumbs up in my book. 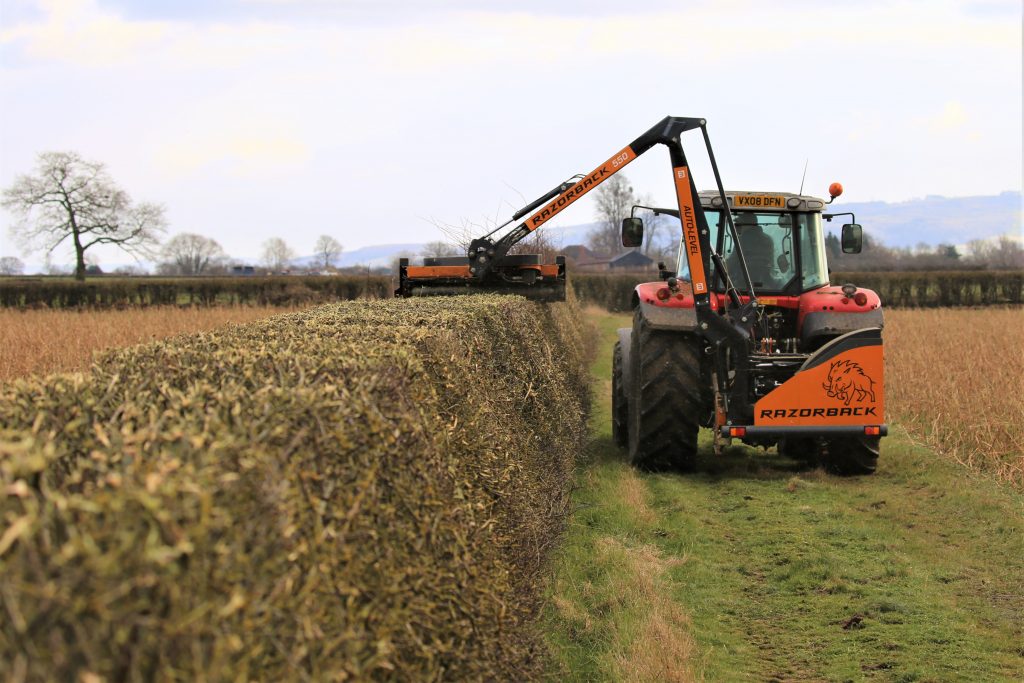 The Razorback leaving a clean, crisp finish to one of our larger hedges

With spring cropping just around the corner, I took a moment to look more closely at the Radish cover crops. The heavy frosts have stopped them in their tracks, and an application of glyphosate for any volunteers and weeds is all that stands in the way of going straight in with the drill, later in April. The previous crop residue is still visible in places, including the standing straw. On closer inspection of the soil with a trowel, I am happy with its composition. The top layer of built up organic matter is clearly visible, the profile is filled with air pockets and worm holes, along with the fine root structures of previous crops.

Soil health is an important part of strip tillage and should be of forefront concern for any farm. In my time at Springfield Farm I have seen dramatic changes to the soil in a relatively short time since switching to reduced tillage. Organic matter has doubled and the soil retains water and nutrients more effectively, reducing nutrient leaching and erosion, all of which have had a definite impact on the rise in yields. 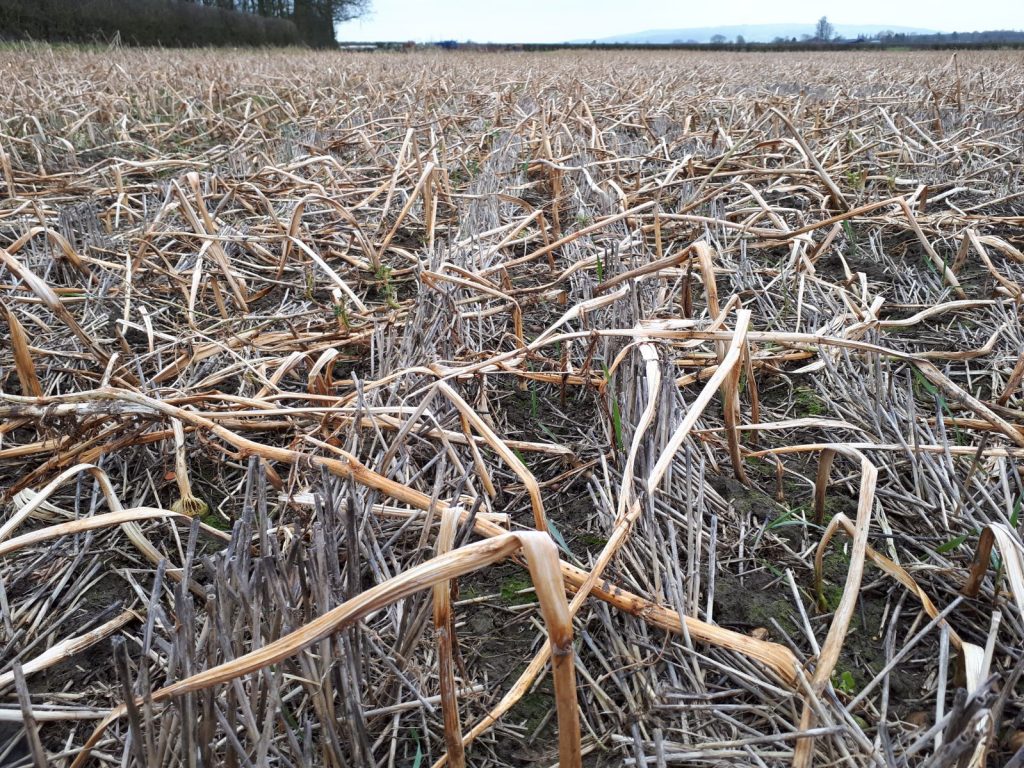 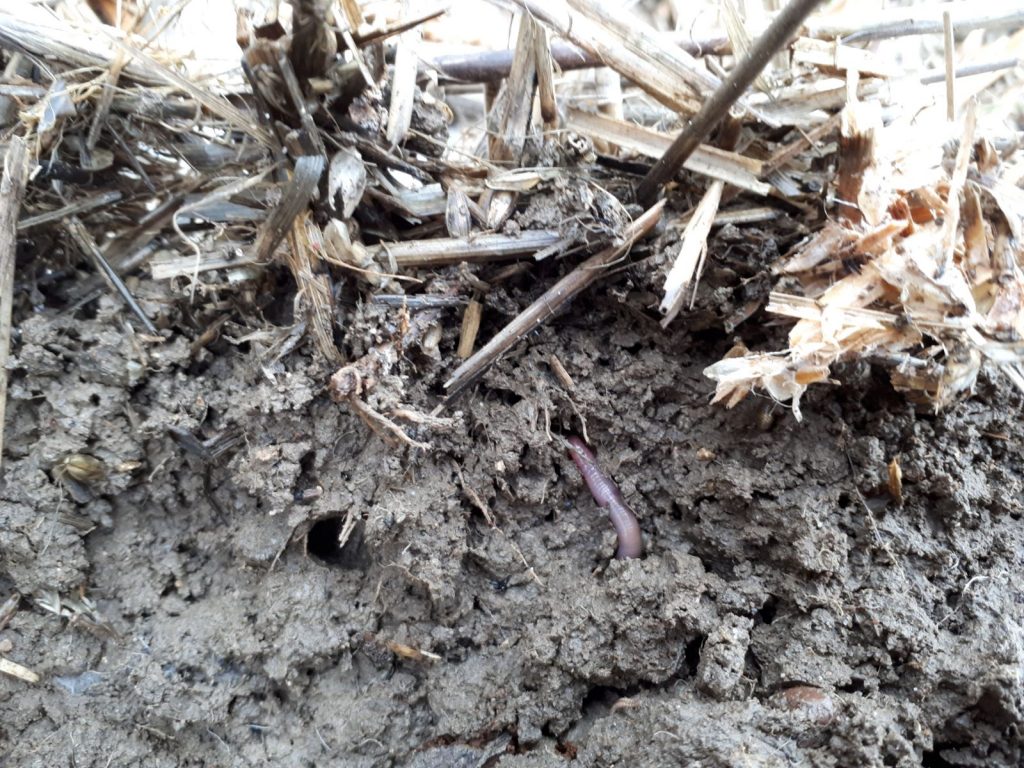 Worm activity is clearly visible throughout the soil profile

February marked the start of this year’s fertiliser campaign, with the later drilled Wheat getting a top up of 200kg/ha of Sulphur + N. This included the precision drilled Wheat seeded at 18kg/ha which is starting to move on.

We precision planted two different varieties, the hybrid variety Hyclick and the conventional variety Graham. The hybrid wheat didn’t receive fertiliser at drilling on the advice of the seed company, so this is the crop’s first application; it’ll be exciting to see how this crop develops over the next few months.

Later in the month the Oilseed Rape received a similar treatment, with an application of 200kg/ha of Sulphur + N on the 27th of February. The permanent tramlines meant I was able to travel easily, despite the previously wet weather – something that is important at this time of the year. 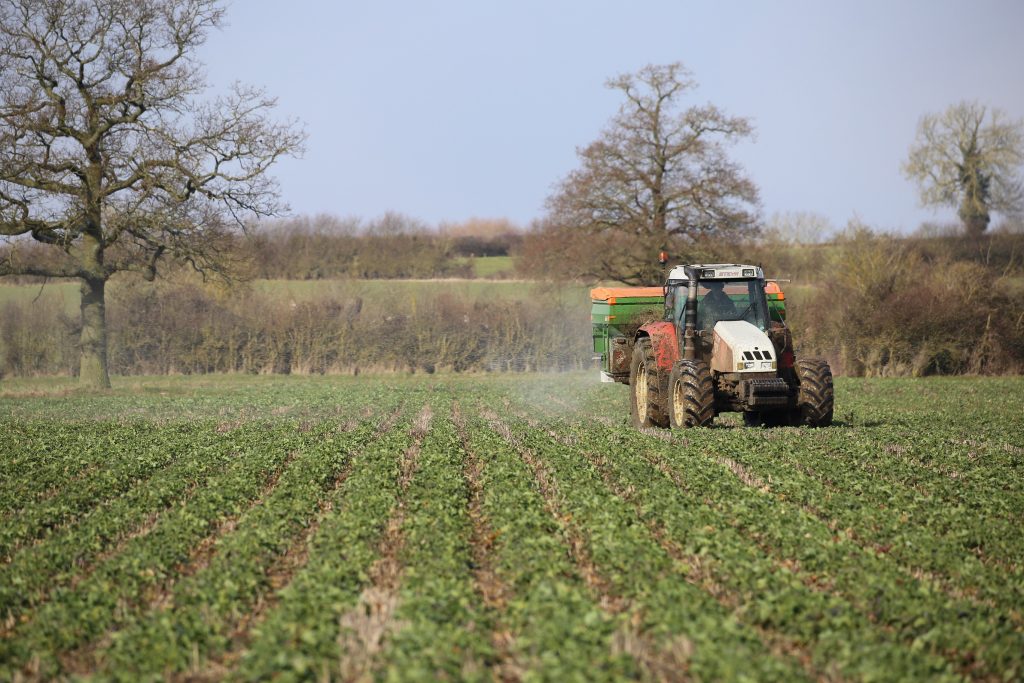 The Rape is looking promising across the farm. The wider rows are well suited to this crop and are filling out nicely although Pigeons have taken a liking to a couple of the furthest fields. A couple of crow bangers and kites ensured they were kept at bay thereafter and the damage is unlikely to cause too much to worry about. 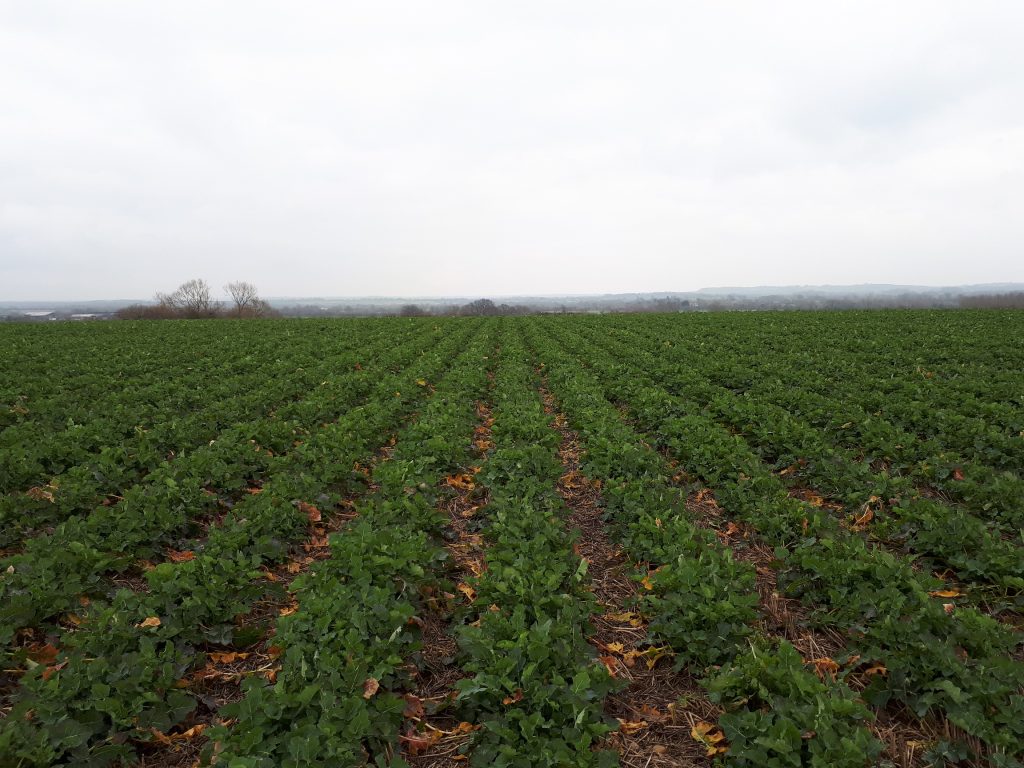 Rape planted with the wide coulter on 66cm row spacings

As with the Rape, the Wheat is waking up ready for the spring, with both the narrow and wide coulter drilled Wheat looking well. It’s felt like a long winter and the first fertiliser application for the later drilled Wheat was a welcome kick start.

I’m still favouring the narrow band coulter for drilling Wheat due to its increased ability to provide a clearer contact of weeds with herbicides, particularly important for contact herbicides which rely on a good contact for their effectiveness. 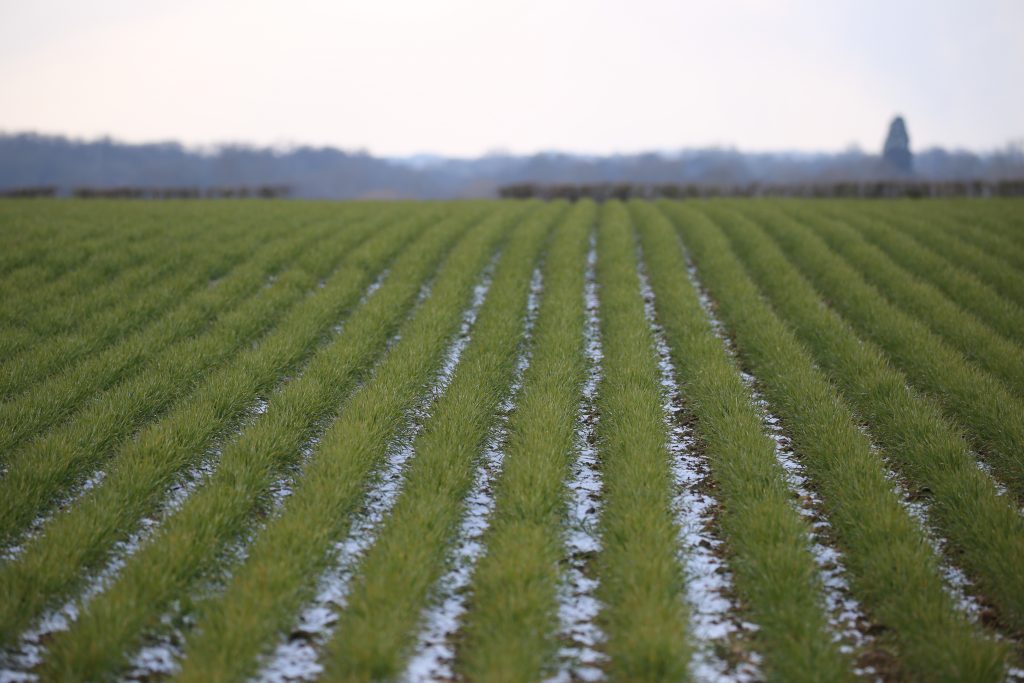 Visitors to the farm

This month we had the pleasure of welcoming a group of farmers and Hutchinsons agronomists onto the farm to share our experiences with strip tillage. Cold but bright, the weather held out and we enjoyed a farm tour followed by a lovely lunch provided by a couple of ladies in the village. The pork pies went down a treat and the day provided much food for thought.

We looked at the differences between Wheat drilled with the narrow and wider band coulters, as well as OSR on 33cm and 66cm spacings. We always try to emphasise our experiences with increased light interception and its positive impact on yield, including increased chemistry contact achieved with wider row spacings. It was interesting to hear other farmers’ opinions, as well as the thoughts of the agronomists who are perhaps more technically minded than ourselves!

Overall the afternoon proved to be a useful exchange of information for all, including myself and I look forward to welcoming more of these types of groups to the farm over the coming months. 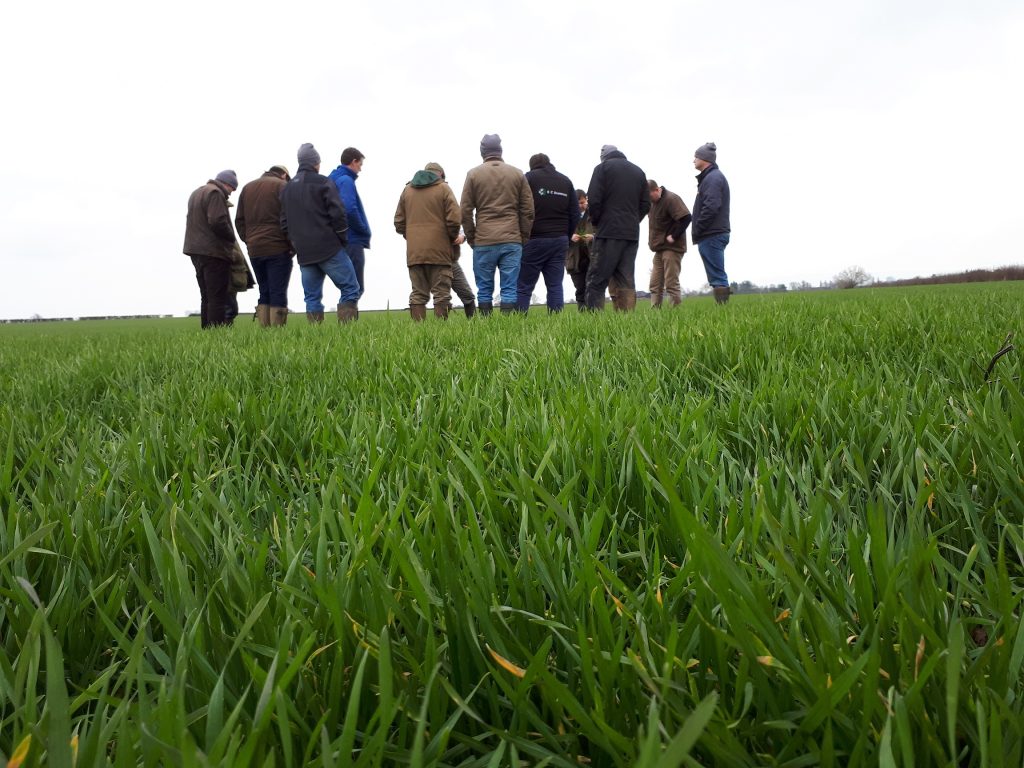 It's always a pleasure to welcome visitors to the farm