Our winter wheat harvest began on 12th August with our earliest variety Graham. With Martin in the combine seat feedback was good and with the grain threshing well, it was soon becoming evident there was a big crop here. However, like every farming story, it wasn’t all good news!

The air conditioning had decided to pack up and with the recent bouts of rain the combine was often lost to dust, so doors could only be opened when the wind was in the right direction. Fortunately, our local Case dealer James Green came to the rescue, re-gassing the system and a walk out was averted!

The dryer, after having had last summer off, was called back into action to dry approximately 30% of this year’s grain. With 70mm of rainfall during the month, it certainly made for a stop start harvest.

The use of an extra 18 tonne trailer certainly proved its worth as we harvested the furthest block on the farm, it was a ‘just in time’ system with myself on the corn cart arriving back in the field to a full trailer. The three fields of Graham averaged 12.1t/ha, with the best field topping 12.4t/ha. It was a very promising start to our wheat harvest and taking the time post combining, it was clear to see by looking at the stubbles, how well the crop had tillered – promoted by the Mzuri Pro-Til row spacing.

Next up were the first set of 1 hectare trial plots. Beginning with a late September drilled trial using the conventional variety Costello, three different seed rates were applied from the farm standard rate of 320 seed/m2, to as low as 160 seeds/m2. The highest yielding Costello seed rate at 12.3t/ha was the 240 seeds/m2 plot, followed by the 160 seeds/m2 at 11.56t/ha and the 320 seeds/m2 at 11.09t/ha – an interesting comparison

Alongside this we had the hybrid variety Hyclick, grown for the second year at Springfield Farm, after displaying interesting traits in its first year. Applying what we had learnt, seed rates ranged from 80 seeds/m2 through to 160 seeds/m2. These plots went on to yield 11.65t/ha at 100seeds/m2, 11/11t/ha at 160seeds/m2 and 10.84t/ha at 80 seeds/m2.

The hybrid trial was replicated in a second trial field, where 100 seeds/m2 went on to yield 12.51t/ha – this was coupled with a first look at new hybrid varieties coming through from the breeder Saaten Union. Out of five hybrid varieties trialled, all at 80 seeds/m2 Hyclick yielded the highest but all of the varieties were within the 10-11t/ha region.

Our glyphosate free field achieved a very pleasing 11.5t/ha. This field, which was sown using diquat on a stale seedbed, remained largely very clean with only an hour spent hand rogueing the odd blackgrass plant. The field will be drilled in the Autumn East-West to aid inter row shading of weeds.

An excellent wheat harvest was capped off by our last field of Costello on 24th August – sown using the wide row spacing of 660mm using a double shoot coulter. With only effectively half the field sown, the crop went on the yield 9.58t/ha, which stood at 80% of the farm’s average yield. I was really impressed with this and underlines the importance of sunlight interception and when given the space, plants will tiller well making the most of the space and light made available to them. 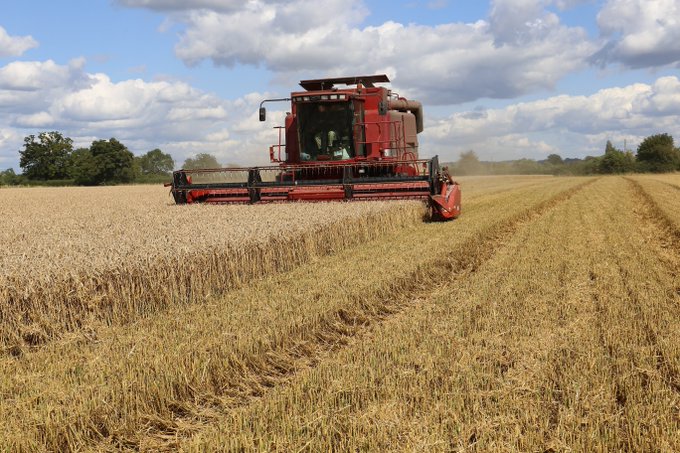