At the start of February, the farm was probably as wet as I have ever seen but the winter crops have continued strong

Our cover crops have reached the end of the road, having done a fantastic job of protecting our soils during another very wet winter. Their termination has taken many forms, from sheep, to frost rolling and of course glyphosate. With two fields left to go, I had been keen to trial Razorback batwing mower to compare. A minus six frost at the start month provided the ideal opportunity to put the green machine to work. With plenty of above ground biomass to process, the Razorback made light work of processing the plants into manageable lengths ready for our worms to pull down into the soil. So frozen were the plants that the cutting action created a ‘dust’ appearance, fingers crossed we see the real thing next month when we are back in to sow our spring crops.

It’s found a number of uses across the farm

The Razorback rotary mower and harrow has been a useful tool on farm throughout the year, including cover crop termination, stale seedbed preparation and maintaining our grassland including our wide grass headlands. It is perfect for use after OSR to chop and distribute stubble which we feel gives us an advantage over slugs by shattering their habitats, something that we find to be particularly effective on a baking hot day. Combined with ground engaging tines, the field surface is stimulated to encourage a flush of weed seeds and volunteers which has helped us to achieve an effective stale seedbed ahead of drilling the following crop with our Mzuri Pro-Til. 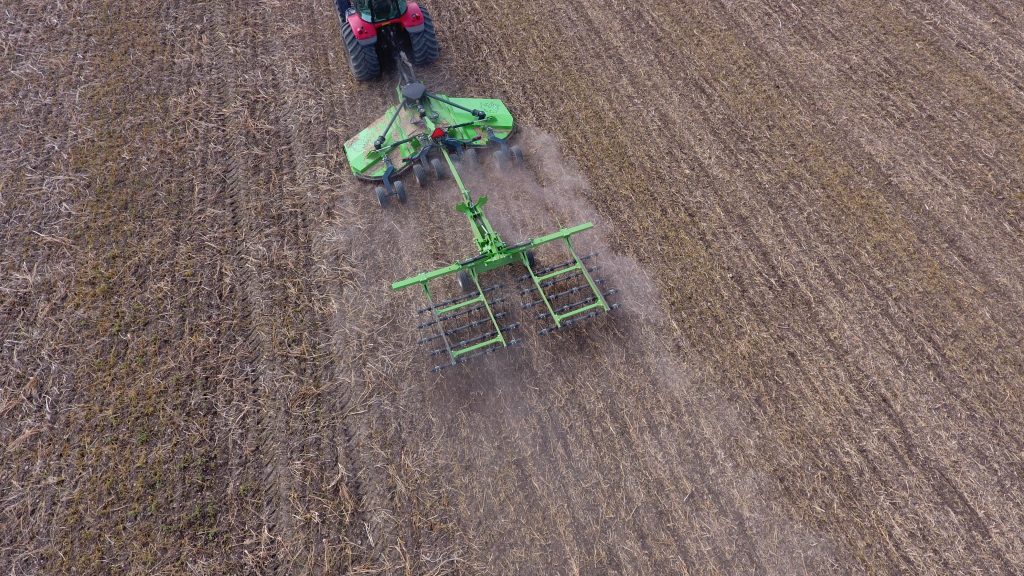 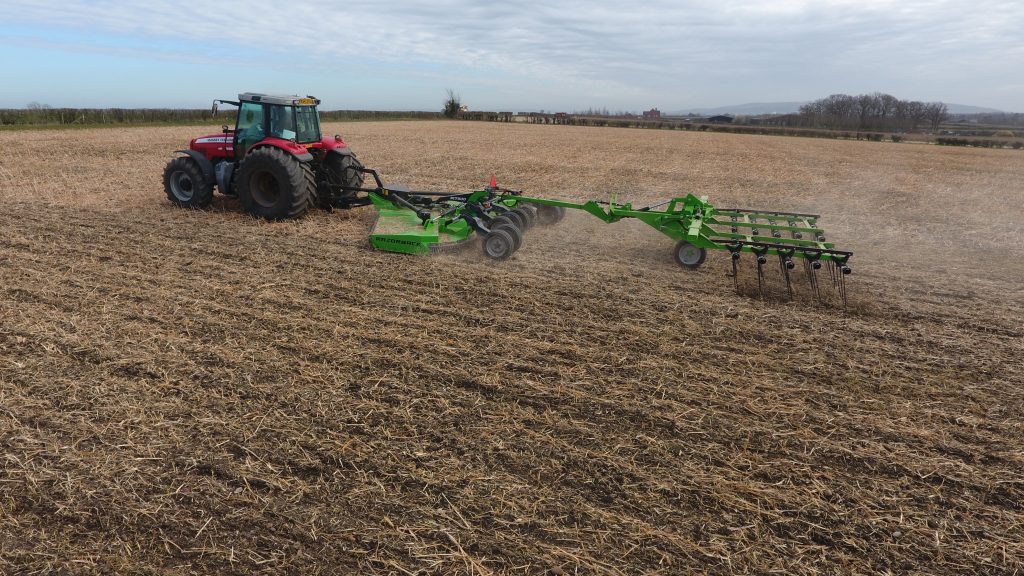 Our annual winter tree planting resumed with 500 trees to go in this year. Despite the ‘soft going’ I managed to break my faithful spade with only 10% planted, mostly likely due to Christmas excesses, it certainly comes at a good time of year to be getting some exercise! With another few awkward corners planted and replacements made for the high mortality seen with last year’s larch planting, a satisfying job was ticked off the list. Fingers crossed, we don’t see a repeat of last spring’s prolonged hot and dry spell that required regular watering.

As the winter draws to a close the last of this year’s hedge planting on the farm was completed. It must be said that the soft going made for easy progress, soon having sections ticked off the list.  The gapping up of some old hedge lines is certainly a worthwhile and satisfying job, ensuring the continuity for future of years of new growth and dead wood, providing a key habitat on the farm.

Maintaining the farm and our habitats

With field work up to date my attention has turned to farm maintenance. We have a number of willow trees along water courses on the farm, which after a certain age/size seem to a have a tendency to fall into fields and onto fences. A good day was had processing wood into three piles, bonfire, wood burner and some tucked in a corner left to rot down, providing an important habitat for invertebrates, sometimes its good not to be too tidy!

The field corners that we have put down to maize and sunflowers have provided excellent shelter and food for various wildlife across the farm since the summer. With the sunflowers appearing to be an early favourite with not a seed left in any of heads. I thought we should supplement these areas as they were now established feeding points with some standalone feeders. A trip to Perdix just up the road for some excellent custom bucket feeders which I filled with a blend of seeds, made for a pleasing sight as I continue to pass by on crop checks to see them in use.

It is so important to look after our farm in a way that allows wildlife to thrive and by making small changes, we can literally watch the results grow!

An advantage of the early winter wheat harvest has been an early entry for our cover crops. One of the most enjoyable crops to grow, which although comes at a busy time of year, the simplicity and speed of drilling with the Pro-Til allows us to easily fit it in around harvest.

The enjoyment comes from the ‘close the gate’ nature of the crop and at a time of year where soil temperature and sunlight promote fast establishment and building of biomass. When time allows, I find myself taking the long way back to the grain store to look over the hedge as the crops moves on so quickly!

This year saw a substantial increase to the cost per kg of a few of the components of our mixture, most surprisingly oats. A few tweaks to the seed rates later, and we had our five-way mix comprising of Oats, Phacelia, Linseed, Buckwheat and Sunflowers. A mix that works well both as part of our wider rotation, but also the work it will do above and below ground. Conditioning and protecting our heavy clay soils over winter, ready for the entry of our legume break crop in spring, this cover crop more than justifies the cost and pulls its own weight on the team.

Drilled between the rows of stubble into friable soil, excellent establishment was achieved across all species within the mix

More often seen over winter on our cover crops, sheep made an early return to our arable ground this year as we took a different approach to a field of volunteer OSR that wasn’t bordering new crop. With a healthy stand of plant and a willing grazier we set the mob to work, taking back the lush growth ahead of winter wheat. In the next field we had our inter row legume mulch crop, so a single field was created of the two using electric fencing. I would love to be able to feedback that preferential grazing took place but with the choice of volunteer osr, volunteer wheat, birdsfoot trefoil, lucerne, white clover and a timothy and rye grass headland they truly did have the buffet to end all buffets. After a week all had been evenly grazed back and with the dry September, they hadn’t made a mark. 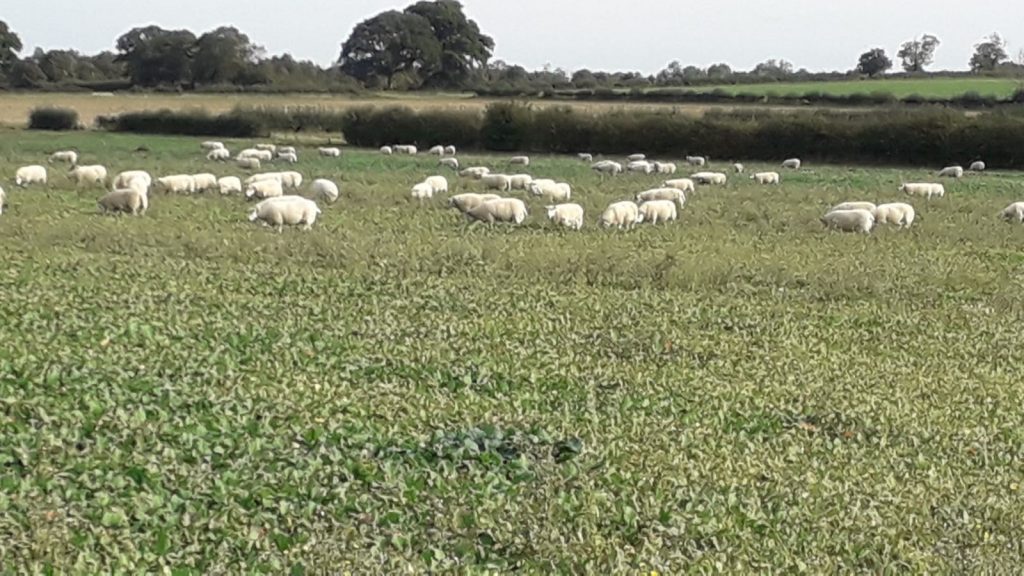 With a dry September our temporary visitors barely left their mark on the ground, ideal conditions for this type of management

The buffet was a success across the board

Crop walking one morning at beginning of September saw me a do a double take as I crossed between fields. I discovered a rather unexpected result of the replanting of a hedge line in January, which was now providing shelter for our nemesis, the CSFB – with the hedge guards acting like a sunroom, warming them up for a day of shot holing ahead no doubt. I’m confident in time this newly established hedge will provide an excellent habitat for our beneficials and hopefully their work has already begun, they must just be operating a little more discretely than their brazen target!

Whilst far from taking a year off, it seems the CSFB numbers appear to be considerably down on what we’ve seen in the previous two years. Evident during harvest, in the grain store and trailers there were hardly a shiny nuisance to be found.

Our earliest drilled OSR managed to go almost totally unscathed, no doubt aided by the damp second half to August. The plant population and subsequent biomass that has been built has been ideal. As a result, it has kept the sprayer a little busier, firstly with a pass of Falcon to remove volunteer barley which all the OSR crops received during September. Additionally, Belkar was applied at 0.25l/ha to remove a good spectrum of broad leaf weeds before the rows close up. Belkar is proving a useful tool in the armoury for the last couple of years as we have moved away from pre emergence herbicides, partly for risk management but more importantly not wanting anything to restrict early growth.

The fields sown on 26th were a little slower than expected to get going due to 90mm of rain during the second half of August, this caused soil temperatures to drop temporarily by 5c. Although some CSFB pressure was seen, the crop was always growing away from it, succumbing to one spray as my nerve broke. However, this contained only micronutrients, with the aim to support quick growth and help give me the sense of being useful. Despite my nerves, plant populations have been excellent across all varieties and with a warm, if a little windy September growth has been fantastic.

The final field sown certainly bore the brunt of the grazing seen this season and as if like clockwork the first weekend in September saw an influx of CSFB. For a number of nights they could be found happily munching away, putting the plants hybrid vigour to the test. To my delight, and testament to this strong trait, it did manage to keep on growing through the pressure. Whether we will see a higher incidence of larvae as we enter winter, I suspect so. The half of the field that had buckwheat sown as a companion applied via the Stocks applicator on the Pro-Til, has certainly looked well. The buckwheat is very fast to strike and emerge, ideal in that respect as a companion. Although, in terms of acting as a distraction, grazing damage seems to be similar across the field, but importantly the buckwheat is a host for mycorrhizal fungi, maintaining the link where OSR on its own doesn’t.

Looking back on this farming year, our soils have been tested in all manner of ways and I am pleased with just how well they have fared. The importance of our chopped straw residues, stubble management which keep the soil structure intact and cover crops have all benefited both our soils and system – allowing us the flexibility to grow profitable spring crops, rather than compromised winter crops or summer fallows.

Another element of flexibility derived from Pro-Til system, is where over half of the field remaining untouched at sowing, enables the carrying of livestock during the winter without detriment to our topsoil. Sheep have been a fantastic addition to our approach to cover crop residues, which typically require one less application of glyphosate. Importantly, as the aim of our cover crops is to benefit plant and soil health, deploying above ground livestock supports our below ground livestock. By beginning the processing of residues for the bacteria, fungi and worms to continue, they provide readily available nutrients to support new crop, ensuring the link between plant and soil remain strong.

Our long-term trials of winter oilseed rape and wheat produced some good results. And whilst overall yields were down, the information gathered is undoubtably useful to paint a true average of performance for seed rates, row spacing and genetics. The opportunity to do similar trials with our spring cereals was too good to miss. With spring barleys propensity to tiller, the 3 row spacings, each delivered strong results, ideal to be deployed in different scenarios in a commercial setting. The spring wheat inter row legumes offers exciting opportunities for the future and is something I am very much looking forward to building upon.