The year draws to a close with our soils still in moisture deficit, after what was an extraordinary summer.  This year appeared to present every extreme, from biting cold through to March to the scorching heat carried well into Autumn.

It has never been more apparent that in an uncertain environment, us as farmers need to have resilient, well looked after soils and a system that can work in varied conditions. The key to achieving this at Springfield Farm has undoubtedly been through switching to the Mzuri Strip Tillage system in 2010. At the beginning of this year, with moisture seeming almost too plentiful, those who cultivated pre-drilling were soon left with regret as the moisture lost from cultivation wasn’t replenished because of the prolonged dry spell that came about almost overnight. This was much the case during the more recent Autumn where monthly rainfall figures were down. Pre-cultivated crops were noticeably slower out of the ground due to the lack of moisture in the seeding and surrounding zones, destroyed and dissipated by heavy cultivations. The one pass system meant that we retained moisture at every available ‘pass’ and, without a doubt, our crops looked better for it. Namely, we had a flourishing Rape crop in an area that had very little to show for the Autumn work involved. Our aim, as always, is to build a strong, healthy plant setup in the right environment to cope with what the winter might bring.

Whilst sheep are normally a presence on the farm, grazing the old ridge and furrow pastures, they aren’t normally found on the arable ground – at least not deliberately, anyway! This month, however, the ground conditions under foot were excellent for the time of year and, with huge amounts of biomass on our cover crops, we decided to experiment with grazing them off. One thing I will say, I am amazed at the wonder of an ATV mounted electric fence system that meant we had a stock proof field in half an hour. Brilliant, I thought, although I’m sure that like with anything sheep-related, the term ‘stock proof’ may be put to the test.

First on the menu was the Radish mixture sown four months ago at 8kg/ha with 120kg/ha of DAP down the front legs, all in one single pass with our Mzuri Pro-Til 3T. Running this sheep show is our local shepherd Eddie, who commented on how the sheep took to it immediately, due to the novelty of grazing at head height, I guess. Next up will be our Oat cover crops, sown with grazing in mind – direct into Oilseed Rape stubbles, which will hopefully provide a tasty blend of Oats and Oilseed Rape volunteers.

In the interest of experimentation, we will leave sections of the fields un-grazed (at least that’s the plan – see ‘stockproof’) to see if there is any difference on the subsequent spring crop. I’m hopeful this will save us a pass of Glyphosate as the high biomass cover crops can often create a large amount of shading, therefore requiring two passes of glyphosate for a complete kill.

Heading into Winter, our hedgerows are brimming with berries and hips, after a fantastic pollination earlier in the year. We also made the decision to keep back our precision-sown field of Maize and Sunflowers to support the farm’s wildlife through the Winter. The result, is quite a haven in the middle of the farm – I particularly like the dinner plate effect of the sunflowers, with a large number of heads already looking decidedly empty.

As always, with lots of trials on the farm involving all of our different crops, 2019 looks set to be another interesting year. We’re collaborating with a number of different organisations as part of these trials which will provide us with valuable independent insight – information we look forward to sharing with you over the coming months.

From everyone at Springfield Farm, we wish you a merry Christmas and a wonderful new year! 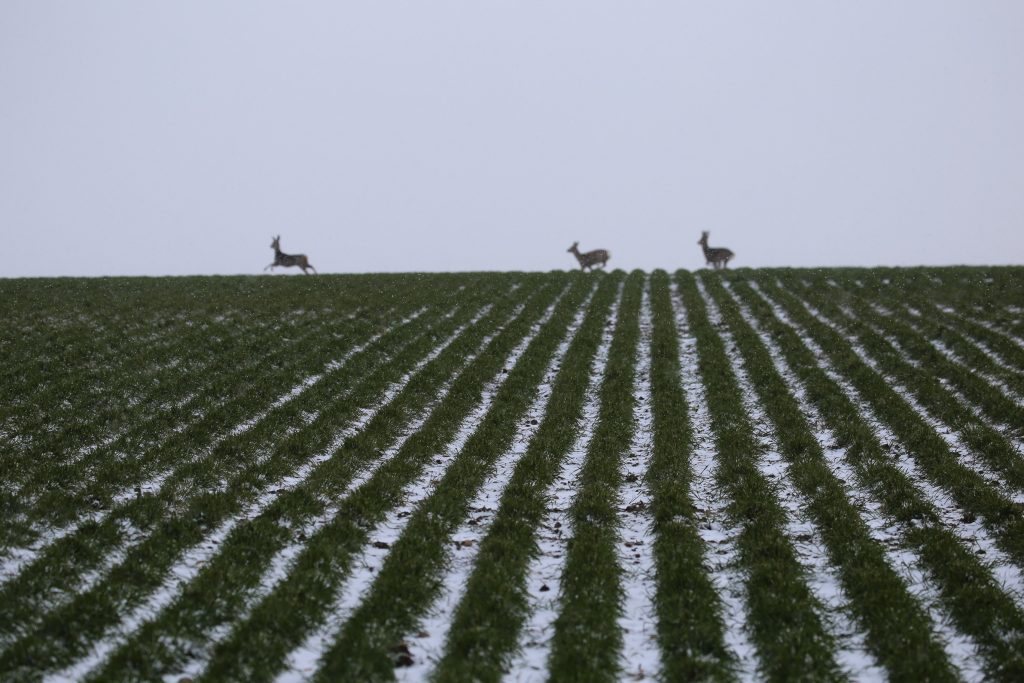 Radish cover crops are providing plenty of biomass for grazing